GS Pro (also known as Ground Station Pro) is an iPad app designed to control or plan automatic flights for DJI aircraft. Through its clear, concise interface, complex flight missions can be planned with a few taps. GS Pro will then automatically take pictures at pre-set waypoints, providing the accuracy required for precision mapping. A Virtual Fence feature increases safety and ease of use by locking the aircraft’s height and speed within a designated area. With these features, GS Pro dramatically increases the efficiency of various industrial applications, including but not limited to, aerial imaging, architecture, precision agriculture, electrical inspections, search and rescue, safety control, and more. 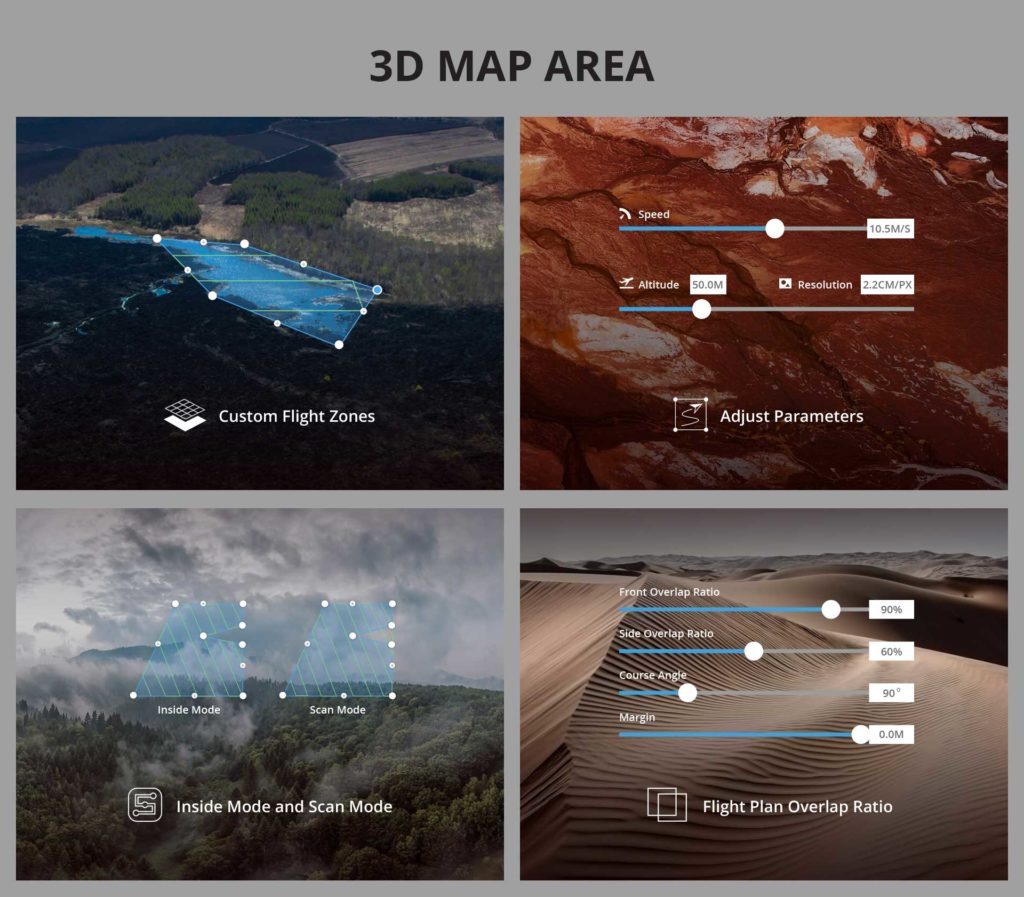 Custom Flight Zones
GS Pro automatically generates efficient flight paths after the user has set their required flight zone and camera parameters. The aircraft will then follow this route throughout its mission. The image data captured during these flights can be input into 3D reconstruction software to generate 3D maps, while the mission itself can be saved for re-use.

Inside Mode and Scan Mode
Two Flight Course Modes are available: Inside Mode, in which the aircraft follows an automatically generated routed within the chosen area and Scan Mode which provides the fastest route to cover a designated area.

Flight Plan Overlap Ratio
To achieve better 3D reconstruction, the default photo overlap is optimized for a range of supported cameras. It can also be independently adjusted. 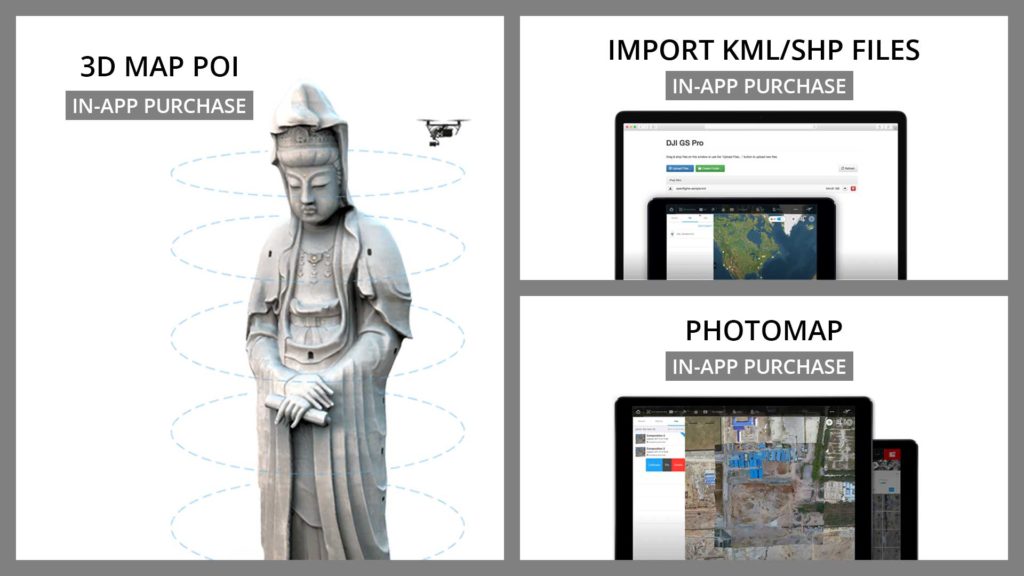 3D MAP POI – IN-APP PURCHASE
Generate detailed maps of tall structures using 3D Map POI. Simply choose the subject and set a distance between it and the aircraft. GS Pro will then provide relevant parameters including speed and time required to circuit the structure. Images captured can be exported into 3D reconstruction software to create accurate 3D models of the entire building.

IMPORT KML/SHP FILES – IN-APP PURCHASE
Increase your construction mapping efficiency by importing KML/SHP files into GS Pro. KML/SHP files, which contain important geographic information, can be imported into GS Pro via a PC or Mac wirelessly, or directly from within an iPad. After the geometries have been successfully imported, users can swipe left on the geometry list in the Map Panel, and GS Pro will automatically generate a flight mission according to the geometry field, helping users to conduct mapping with accuracy and ease.

Mapping with GS Pro becomes even more flexible by adjusting waypoints. If GS Pro fails to generate a geometry similar to the target building or sets a flight route that’s not able to deliver a good result, users can still manually adjust the waypoints by dragging or add new ones to meet their needs.

PHOTOMAP – IN-APP PURCHASE
The newly-added Photomap function helps users efficiently create aerial photograph-based maps. After users complete an aerial photography mission in the desired area and import the photos into GS Pro, the software will automatically create a composite photo of the area that users can adjust as needed. 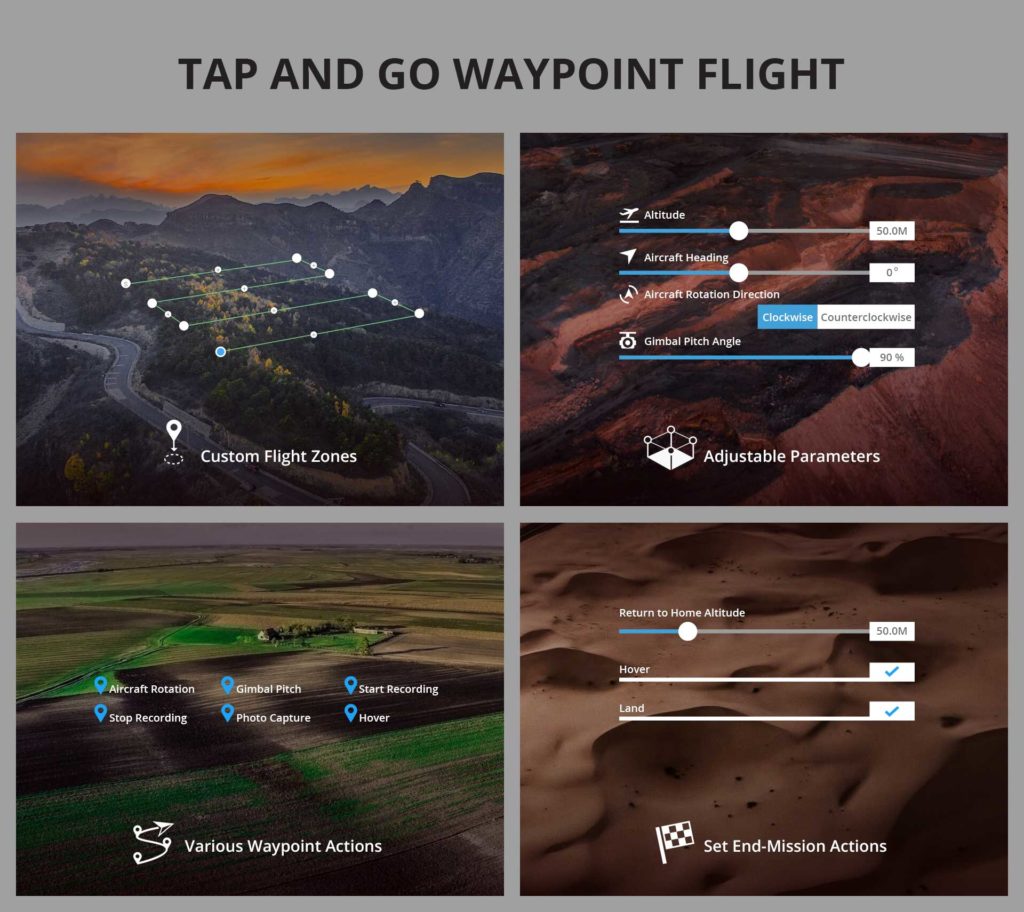 Multiple Waypoints
Up to 99 waypoints are available, depending on the needs of each flight.

Adjustable Parameters
The altitude, speed, gimbal pitch and aircraft rotation (clockwise or counterclockwise)
at each waypoint can be pre-defined

Various Waypoint Actions
Each waypoint can have up to 15 consecutive actions, including aircraft rotation, gimbal pitch,
start/stop recording, photo capture, and hover.

Set End-Mission Actions
After the aircraft finishes its flight mission, it can be set to Return to Home, Hover, or Land. 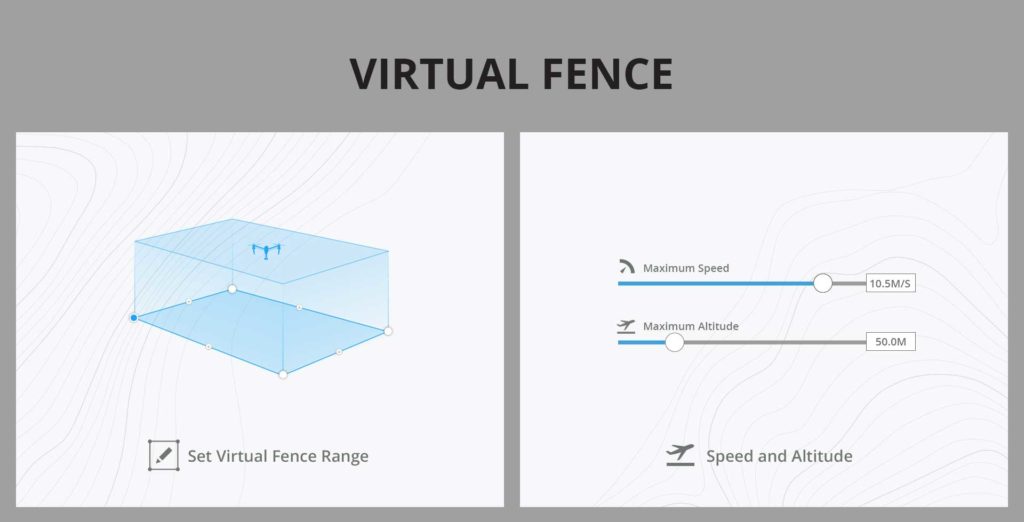 Virtual fence defines a specific area of flight and is useful in scenarios where some areas of a site are no-fly zones or if flight should only happen within one area, such as during manual pesticide spraying or flight. It is also useful in pilot training situations. As the aircraft approaches the virtual fence, it will brake and hover to ensure it stays within the flight area.

Set Virtual Fence Range
The size and shape of the Virtual Fence is completely customizable. It can be created pre-flight, or fly around the zone to mark boundaries using the aircraft’s GPS coordinates.

Speed and Altitude
Set the maximum speed and altitude for the aircraft when flying inside Virtual Fences.

Fleet Management
DJI GS Pro is a powerful, convenient and easy to use tool. With just a few taps on an iPad, complex flight routes can be created, giving critical missions added accuracy and reliability. GS Pro is an indispensable tool that is capable of dramatically increasing efficiency in a wide range of industries. 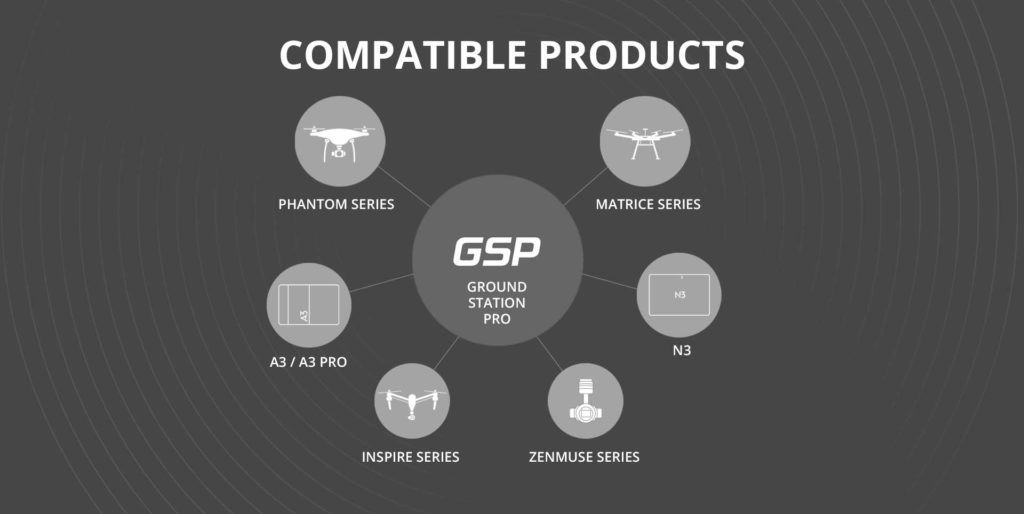 For more information, please contact us at +65 87255730 or email us at info@flyingbots.net